Ever wonder how many calories are in a shot of vodka? Do you think the light beers you are drinking since you became more health conscious are actually a lower calorie alternative? What about wine? Is the old myth about drinking a glass of wine every day for its health benefits really true?

We can all readily admit that drinks containing alcohol aren’t the healthiest option for a beverage if you’re just considering its health effects, but if you would like to enjoy a cocktail this holiday or in the new year without having to count calories for each drink that you have, Philadelphia Addiction Psychologist, Jeremy Frank Ph.D., C.A.D.C., shares some facts about alcohol’s big three: liquor, beer, and wine.

Let’s start with the basics.  As a standard drink, liquor is typically served in 1.5 fluid ounce increments, 5 ounces for wine, and 12 ounces for beer.  Typically, a serving of 1.5 fluid ounces of liquor (vodka, rum, gin, whiskey, etc…) contains around 100 calories per drink. On average, a serving of red wine has 125 calories and white wine has 121 calories.  Beer, America’s favorite alcoholic beverage as determined by recent Gallup polls, can average 153 calories per serving, and 103 for light beers.  Craft beers which are all the rave today can far exceed the average calorie count not to mention the usual higher levels of alcohol. Based purely on the calorie cruncher the lowest calorie cocktail would be 1.5 fluid ounces of liquor. However, this does not include the sugar-stacked mixers that are most commonly poured into the glass directly after the liquor which can significantly spike the calorie count.  So if you are going to drink liquor, make sure your mixer is something with low calories and low sugar, like club soda or a real orange juice.

Red and white wine have a relatively high calorie count compared to liquor and light beer but what they have that the other two don’t are antioxidants, potassium, and magnesium provided by the health and nutrition loaded grapes used to make wine.  So, the old myth that a glass of wine might actually be good for you might be true in this regard thanks to grapes.  As long as it is being consumed in moderation, there are actually some small health benefits to be had from a glass of wine, particularly the health benefits of antioxidants.  While wine may not have the lowest calories, it has the highest health benefit of all three.

Much like wine is rumored to be good for your heart; many of us have heard rumors that beer is good for your bones.  The silicon found in whole grains is also commonly found in beer, and silicon can in fact be beneficial to our bones often strengthening them over time.  While consuming one to two beers a day might have significant dietary and nutritional benefits found in silicon, other studies have shown that consuming more than one or two alcoholic drinks per day might have negative overall health effects especially on the liver. Again, we know that drinking alcohol in sum won’t actually benefit our health, but if justification is needed to enjoy a cocktail, you can claim that in moderation wine is good for your heart and beer is good for your bones.

In conclusion, what is the healthiest of all three types of alcohol?  We have determined that wine is the best alternative, however whenever you drink, remember there is still ethanol in each and every drink you consume. Ethanol is a neurotoxic and psychoactive drug, the number one recreational drug of choice in the united states. There will always be a healthier drink alternative that does not contain alcohol.  If being healthy and nutrition-conscious is your number one priority, then alcohol is not the way to go, rather a juice drink, shake or my favorite, “the Philadelphia Addiction Psychologist Special?…Good old fashioned seltzer.., from a tap, from a bottle or from a can.”  If you are drinking alcohol,  remember to drink water or seltzer in alternation with your cocktails to stay hydrated throughout the evening and the following morning. 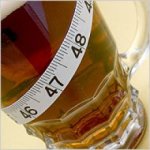 Most importantly, moderate and responsible drinking can be defined by the National Institute of Health’s assessment of “low risk drinking” which is for men: no more than four in a day and no more than 14 per week. For women, it is no more than three a day and no more than seven per week. Gallup polls in recent years suggest that the majority of Americans consistently consume on average 4 drinks per week ranging from 1-7. Only 12 percent drink more than that and a whopping 33 percent are entirely sober. If you find that it is harder than you think to drink moderately or make healthy changes in your drinking patterns consult an addiction psychologist or addiction therapist near you who can guide you through the decision process to a healthier and happier way of being.

For more resources to learn more about drinking, health and nutrition you can consult the following websites: